More information can be found here on the new organs in Wiltshire page of My Primitive Methodists. 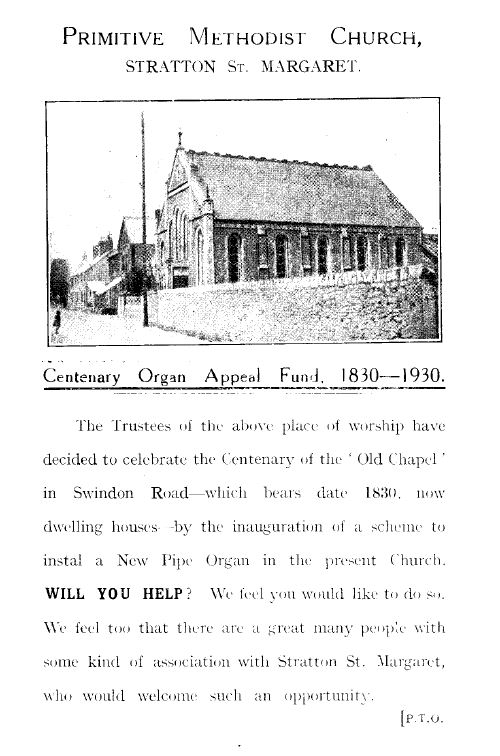 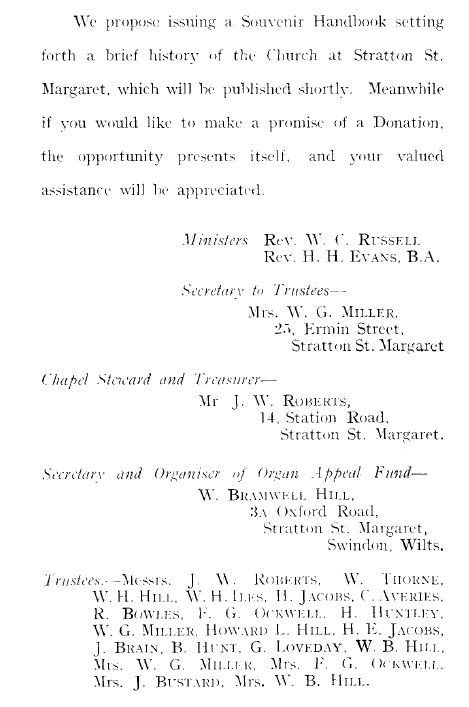 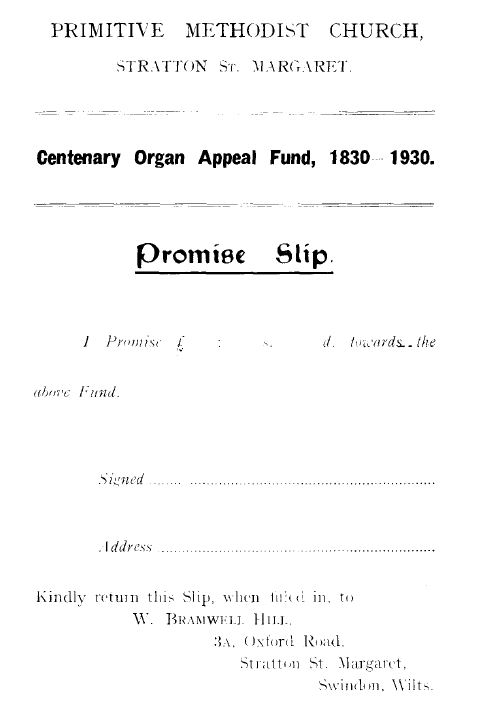 Prior to the current pipe organ the congregation sang along to an American organ. (bigger and louder than harmoniums - volume necessary for the Methodist singing!)  It had been in use for over 38 year and originally cost £32.

The anticipated cost of the pipe organ was in the region of £500. It was felt that the instrument worthy of the building should be secured - a decision made in 1930. It was planned to have the organ in place to celebrate the centenary of the old chapel in Swindon Road and the Jubilee of the present church in Ermin Street.

In February 1932 it was reported that the organ fund stood at £68 cash plus a number of promises.

On Friday 2nd March 1934 a social evening was arranged by the choir members. Recitals were given by Mrs Farmer and Mr Percy Wheatley. Proceeds of £5 were added to the funds. Other events including lectures given by Mr A Burnett raised £1.

In July 1936 a special trustees meeting was held presided by Rev. W. H. Kent. It was decided to order a new English pipe organ at a cost of £450. The instrument would be of the two manual type with an electric blower and 19 stops and would be installed by the end of 1936. £100 was received from two anonymous donors and a further £25 from Mr W.E. Morse. Permission had been sought from the District and Connexional authorities for the installation.

The programme for the celebrations. 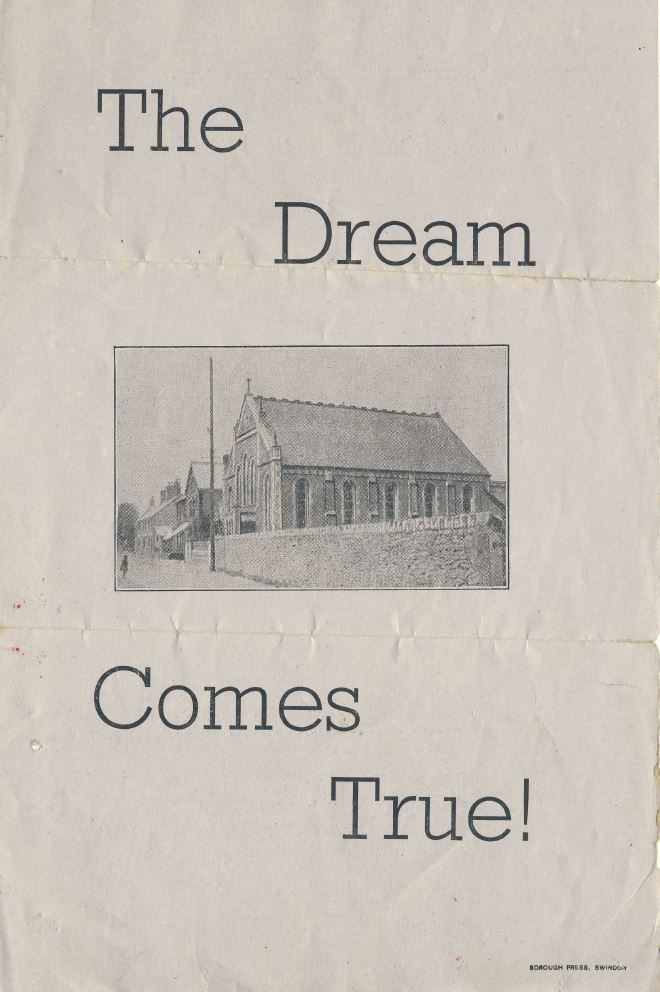 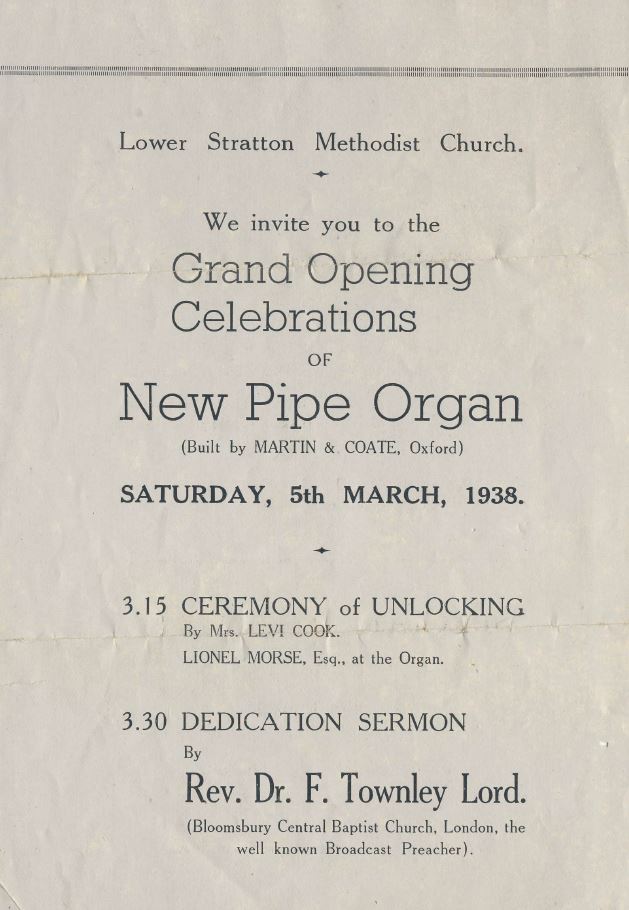 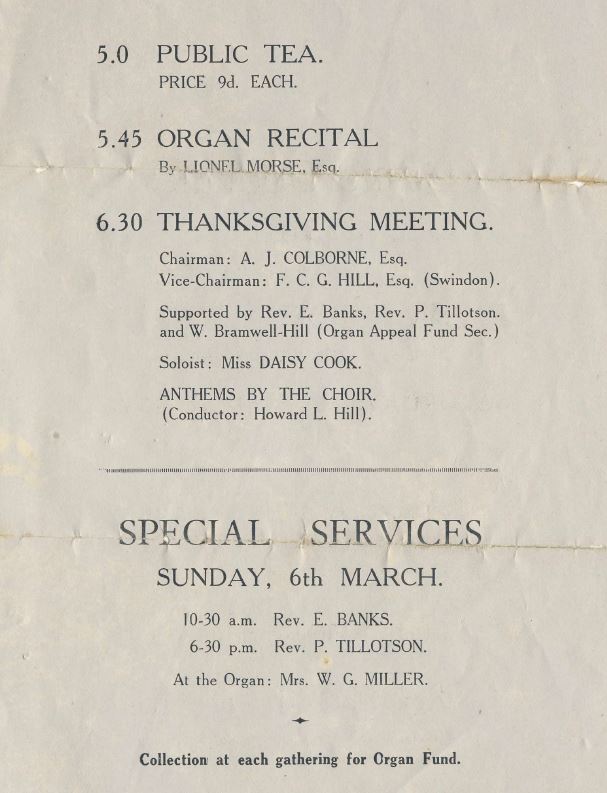 A representative of the firm which build the organ (Martin and Coates, Oxford)  handed a gold key to Mrs Cook and the Rev., E Banks said a dedication prayer. A grand-daughter of the late Mr J Cook, Miss Daisy Cook, sang 'The Lost Chord', and Mr Lionel Morse, of Swindon, who designed the organ, rendered appropriate music. After tea, organised by Mr and Mrs W G Miller and a 'band of lady helpers', Mr Lionel Morse gave and organ recital.

The evening meeting was presided over by Mr A J Colborne who as a scholar in the Sunday School at Stratton and whose father build the Church. A tribute to the craftsmanship of the late Charles Montague was paid. His woodwork could be seen by all. The Lower Stratton choir augmented by several chorister from other churches sang two anthems - 'O Taste and See' and 'Lord of all being' - conducted by Mr Howard L Hill with Mr Lionel Morse at the organ.

Mr W Bramwell Hill presented a statement of the finances.

A donation of £50 had been promised by the chairman and £23 6s collected that day.

At  the close of the meeting Mr Edward Hill asked  'permission to clear the remainder of the debt on the organ' and handed the treasurer Mr J W Roberts a cheque for £30.

Other gifts given included:

Some of the organ stops were not completed at the installation. The 'prepared for' stops had been initially blanked off on the stop jambs with a black cone and central button. The missing stops knobs were found in a box inside the organ, left from thirty years before. These were added in the early 1960s under the supervision of Mr Coates.

At the reopening recital, which included Boelmann's Gothic Suite, the Orpheus Choir took part. The works ran late with the Dulciana pipes beings stalled at 5pm n the day of the concert. They were not painted until later.

In 1995 F H Browne and Sons of Canterbury did various work including replacing the non standard pedal keyboard with a standard size one, addressing other damage and electrification work including replacing the blower that had become very noisy. Thumb pistons were added and a swell octave coupler. This was paid for by Miss Frances Hill and Mrs Doris Hill at a cost of £14,000 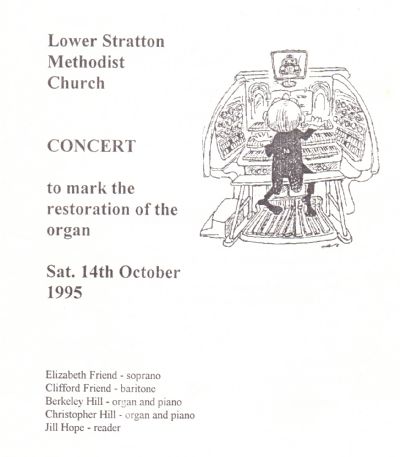 Soon after March 2018 we celebrated 80 years of organ music at Stratton Methodist Church. 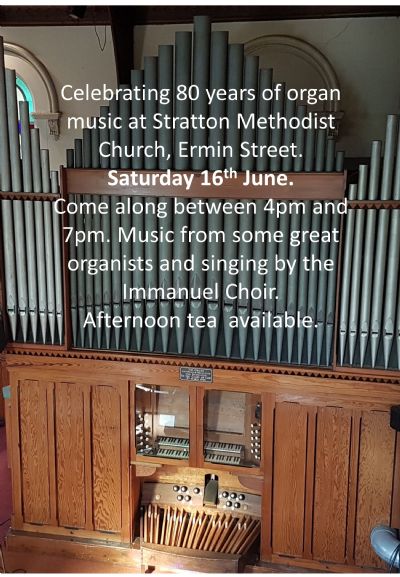 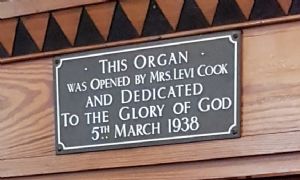 Berkeley and Chris Hill (Miss Frances Hill's nephews) were amongst some of the guest organists who really showcased what the instrument can do. Here is Berkeley playing the famous Widor's Toccata.

Howard Goodall's Choral work - The Lord is my Shepherd. Famously used as the theme tune to the BBC comedy - The Vicar of Dibley. Sung by the Immanuel Choir conducted by Geoff Gleed.

Organ concert, first of all the above videos, then the audio of the entire concert.

Here are some photos of the organ and a document detailing the specification of the instrument. 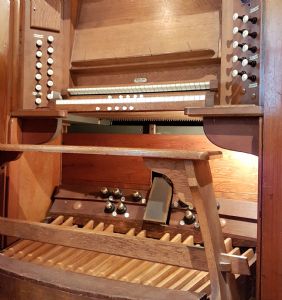 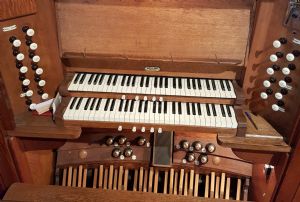 The celebration was originally planned for Saturday 3rd March but due to a horrendous snow storm 24 hours before the event it was necessary to postpone until 16th June 2018.

Keith Harmer presided over the concert 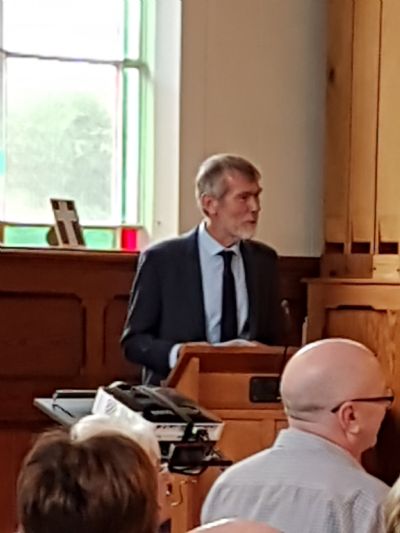 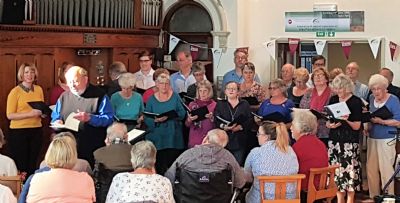 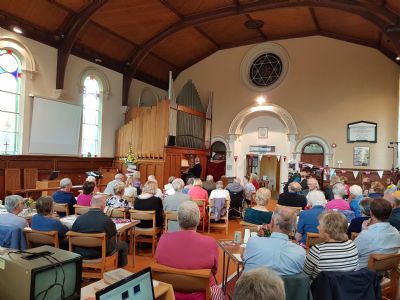 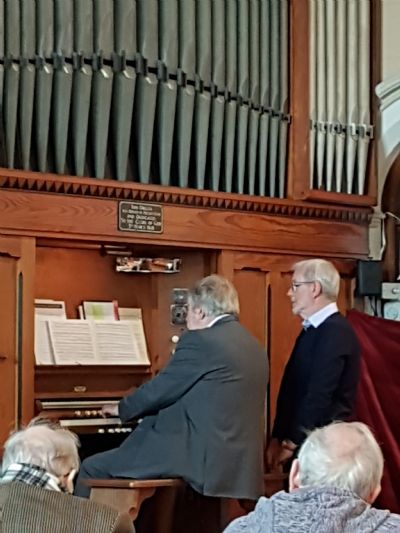